The acclaimed designer, Manuel García has wished to reflect the dehesa of Extremadura, home of one of the world’s most delectable products –acorn-fed 100% Iberico ham– on one of this season’s sought-after accessories: a limited edition silk twill scarf, which would make the perfect gift.

In this latest collaboration, Señorio de Montanera, leader in DOP Dehesa de Extremadura Iberian products, defends the exclusivity, craftsmanship, and expertise that its Iberian hams share with the world of fashion.

García Madrid’s scarf for Señorio de Montanera is part of a Limited Edition luxury gift set that includes an acorn-fed 100% Iberico ham DOP Dehesa de Extremadura, which has been hand-carved and packaged in individual 80g packs. 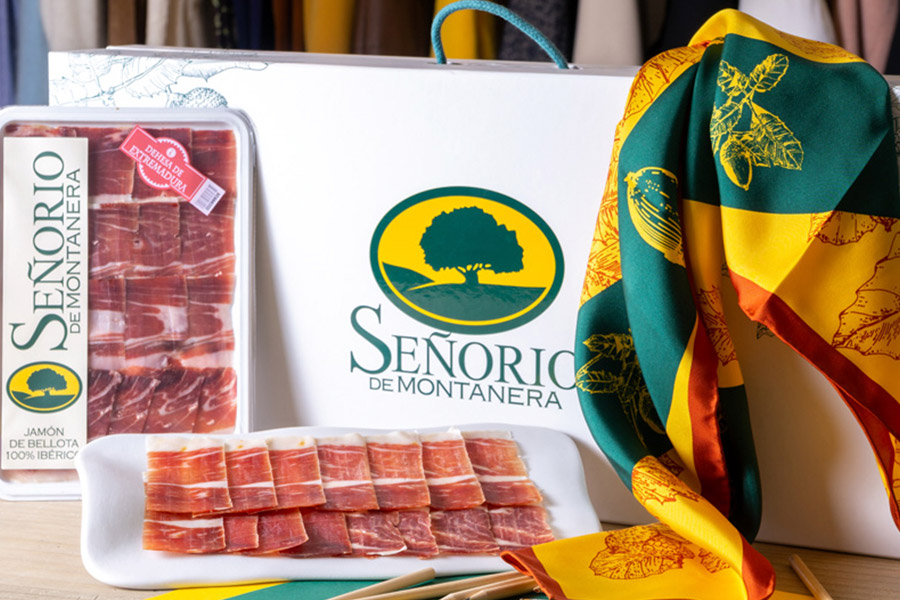 Señorío de Montanera, a leading brand in the production of pure Dehesa de Extremadura Iberian hams, guarantees the quality and traceability of all its products, thanks to its philosophy based on how it cares for its unrivalled raw materials –its pure-breed Iberian pigs that feed on acorns when grazing in the pastures– as well as, on the craftmanship and care in the preparation and curing processes. All this goes into making each piece unique and distinctive. The tenacity and perseverance applied to these principles, which result in some of the most highly valued food products in the world, are shared with the world of haute couture. This premium Iberian ham brand has begun partnering-up with big names in this industry in a bid to underline their exclusivity. Last year, the famed fashion designer Juanjo Oliva designed a maxi-bag for carrying his acorn-fed 100% Iberico ham. On this occasion, Manuel García, founder and creative director of the prestigious men’s fashion house García Madrid, has imprinted the essence of the Extremadura dehesa onto a much in-vogue accessory, the silk scarf.

In the words of Francisco Espárrago, CEO of the company, “at Señorio de Montanera, we are ‘ténticos’: a local word that means tenacious, which is why once again we wish to link the concept of the production of Spanish ham with Spanish fashion, as it shares with us values such as expertise, craftsmanship and taking care of every detail to create an exceptional product.” “We always wanted to make a scarf to adorn our Premium hams and we are delighted with the work done by García Madrid, who has added a refreshingly bold touch, exceeding all our expectations.” You can buy the scarf through the Señorío de Montanera online store in a gift pack which includes the finest Señorio de Montanera ham: an acorn-fed 100% Iberico ham DOP Dehesa de Extremadura, from the pastures that benefitted from an exceptional acorn harvest four years ago and which the master ham-maker has ensured is matured to perfection. The ham is presented hand-carved and sealed in a protective atmosphere packaging (80 g. packs), that perfectly preserve all the ham’s qualities (texture, flavour and aroma) as if it were freshly cut.

INSPIRED BY THE HOME OF THE IBERIAN HAM

García Madrid’s piece for Señorio de Montanera is titled ‘Amanecer en la dehesa” (Sunrise on the pasture). It reflects the elegance and subtlety, the magic and richness of one of the most remarkable ecosystems of the Iberian Peninsula: the dehesa where Señorio de Montanera owners and partners hold more than 60,000 hectares of natural woodland in Extremadura, Andalusia and Alentejo in Portugal. The colour palette chosen represents the variety of shades of this singular landscape throughout the year: the green of the holm oaks and cork trees on whose fruit the Iberian pigs feed; the terracotta hues on which the grass grows in autumn and the yellows and ochres of the soil in summer. The patterns include acorns, oak leaves and swallows, which mark the beginning of the seasons and circular shapes, in a reference to the sun, which brings life. In short: the symbols of the pastureland. Señorio de Montanera describes it “as a tribute to the natural woodland, which is tremendously fragile and threatened; where pure Iberian breed pigs and our farmers’ families are raised, where they have been protecting the trees for over 250 years, contributing to their sustainability.”

The scarf measures 90 x 90 cm and is made and sewn completely by hand. The chosen material is twill silk, a sophisticated, 100% natural fabric, like the product it accompanies, and which is noted for its softness, how attractively it drapes and its versatility. It can be worn around the neck, emulating the sensuality and beauty of distinguished actresses such as Brigitte Bardot, tied to your handbag to give it an original, informal air, tied around the waist, worn as a hair adornment, tying it into a ponytail, plait or bun; as a hairband à la Jackie Kennedy, or knotted under the chin in the style of Audrey Hepburn in an elegant and understated fashion.

Señorio de Montanera was founded in 1995, and ever since its foundation, it has striven to produce Iberian products of the finest quality. Proof of this is that its Iberian breed pigs are fed on acorns and are carefully selected and controlled to meet the most prestigious and demanding guarantees, earning them the certificate of origin: the DOP Dehesa de Extremadura. It is in these pasturelands, with grazing meadows dotted with holm oaks and cork trees, where Señorio de Montanera makes every effort to maintain the quality of the land during every stage of the production process. This investment in quality has led to us becoming leaders in the region since 2001, and one of the largest producers of pure-bred Iberian acorn-fed pigs in Extremadura. Today it has a market presence all across Spain. But not only has it consolidated its position in Spain; it is shortly to embark on an international expansion. Today, it exports a significant proportion of its products to Europe, Asia and America; additionally, Australia has recently been added to this list of export markets. 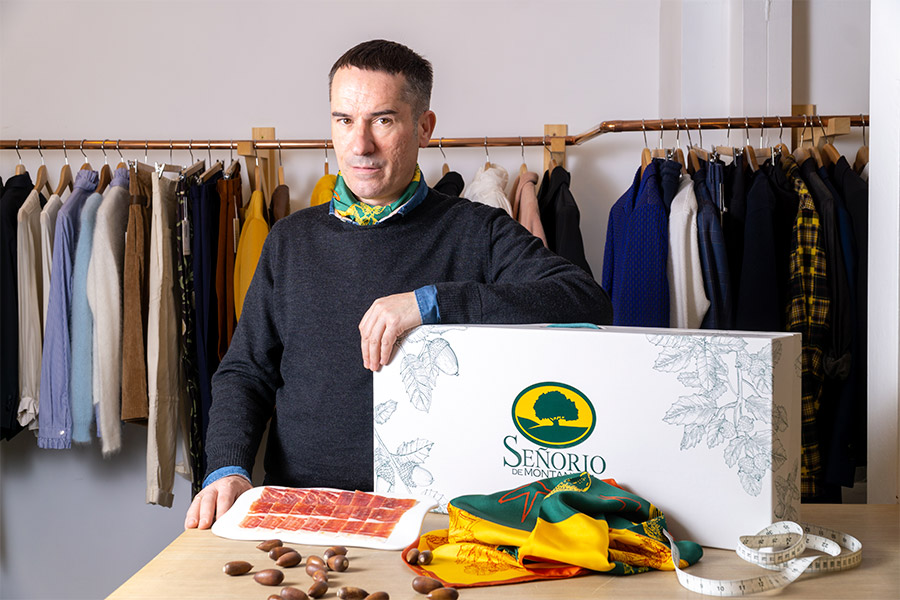 Manuel García (born in Villacarrillo, Jaén, 1970), creative director and founding partner of García Madrid, studied Business Administration at Granada University, from where he moved to Madrid. He developed his career in fashion pursuing a variety of paths and working for a number of different firms, which enriched his broad vision of the market, customer service and the diversity of this complex industry: distribution, dressmaking, fabrics, trends, etc. In the 1990’s he eventually established a solo career, opening his own multi-brand fashion outlet in Madrid, which was the origin of what was to become the bustling shopping district of Fuencarral that we know today. He was also a pioneer in bringing street-wear style to Madrid when he imported a selection of international brands. In 2006, he took the next step, founding his men’s fashion label, García Madrid, as well as opening his own, single-brand store in Madrid’s Malasaña district. Today, he has two single-brand outlets, one in Malasaña and the other in Calle Serrano, where he displays his collection, which he presents twice a year during Fashion Week. He also offers a bespoke tailoring service. In 2017, he was awarded the entrepreneurship prize from the Spanish Ministry of Industry and in 2021 he will celebrate his 15th anniversary, full of excitement and new challenges, “as always, in continuous evolution”. Since the beginning, this designer from Jaén has shown that a fashion firm can be both independent and profitable, by offering a distinctive, quality product, investing in quality, innovation and constant effort. His philosophy is based on sustainability, craftmanship, a job well done, quality and warmth.