Professional tips on how to store Iberico ham at home

Enjoying a Señorío de Montanera acorn-fed Iberico ham at home is a real gourmet treat. We usually focus on the importance of learning how to slice an Iberico ham to get the most out of its flavour, texture and aroma. However, once you’ve mastered the skills of a master slicer, it’s important you know how to properly store the piece in order to preserve all the flavour of the best Iberico ham in your own home.

We’re going to take a look at the best tips on how to store Señorío de Montanera acorn-fed 100% Iberico ham in optimal conditions. 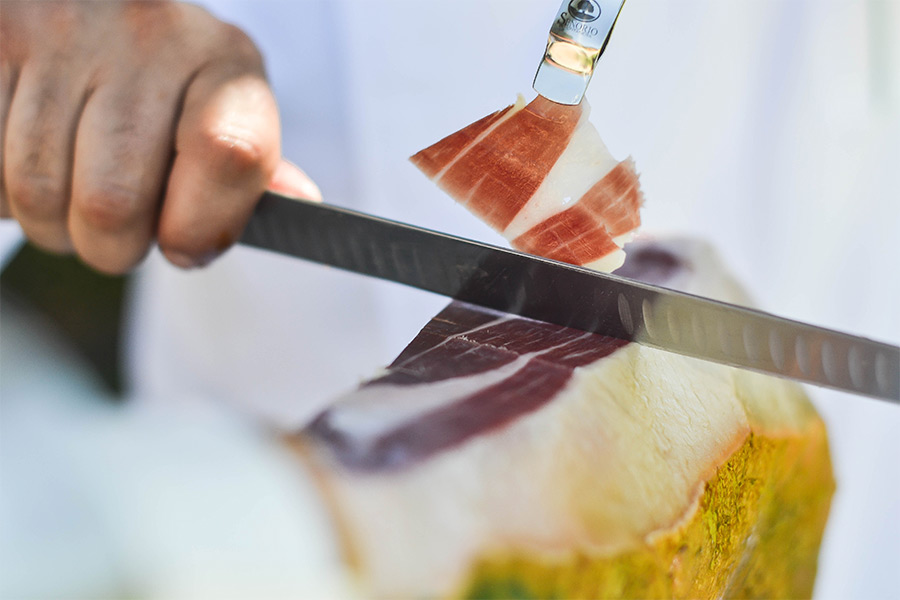 How to store an intact Iberico ham at home?

When you receive the Iberico ham at home, it usually comes in a case, pouch, or gift-wrapped in greaseproof paper. At this point, the way you store it will depend on when you’re going to start it. In principle, if you plan to start it immediately, within less than a week or ten days, you can can store it in a cool, dry place in its original packaging. Keeping the ham wrapped up for a short period of time will not affect its quality, provided that it is not subjected to extreme situations (excessive heat, lack or excess of ambient humidity, in areas close to heating or a source of heat, etc.).

However, if the ham isn’t going to be started within a couple of weeks, it’s best if you remove the packaging packaging (box, pouch or paper) and keep it in a larder, hanging from the plaited string attached to the hoof. There’s no need to remove the product’s identification labels or official plastic seals (which ensure its quality and traceability). We recommend not completely wrapping the Iberico ham, to allow the piece to breathe, and also, keeping it away from direct light.

The appearance of surface mould on the rind, often resulting from the storage conditions, isn’t a problem, and may indicate that the ham is not overly cured, which is actually a good thing. This surface mould can be removed with a dry cloth, although it will come off with the rind when you start the Iberico ham. We don’t recommend rubbing the ham with oil.

How to store Iberico ham during the summer?

Acorn-fed 100% Iberico ham is high in oleic acid—with levels similar to that of olive oil—which is responsible for the extraordinary succulence and quality of the ham. It also contributes to the fat melting easily with heat (in the mouth, on contact with the palate), which means that the high temperatures of summer can affect the storage of this gastronomic gem.

Despite all this, eating Iberico ham in summer, is not only perfectly feasible, but also a truly irresistible treat. To store Iberico ham during the summer, you don’t need to take any extraordinary additional measures, you simply need to follow the tips indicated in this article. To sum it up, you need to store the ham in a cool, dry, lightly ventilated space, away from sources of heat (the oven or cooker) and, if possible, away from direct light to avoid oxidation of the ham and fat. 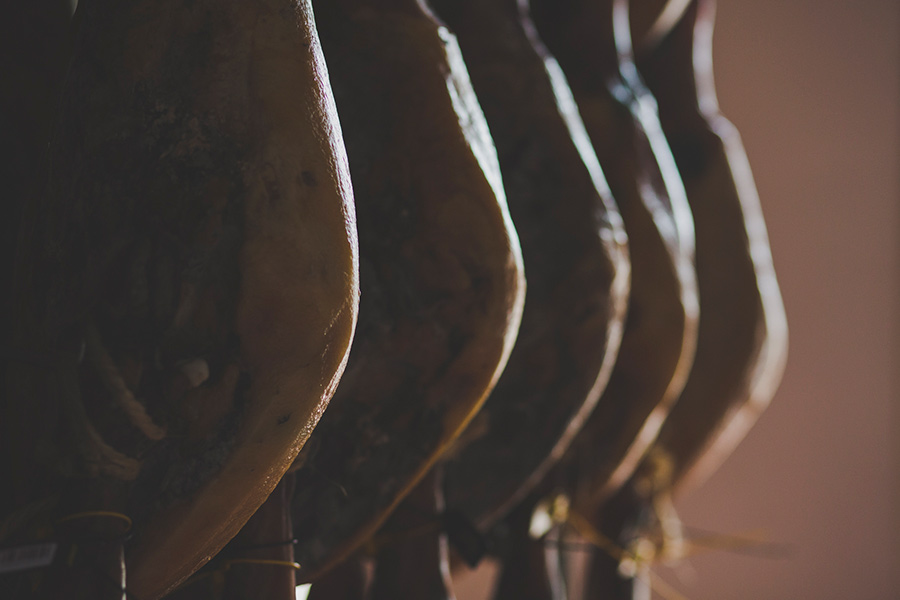 Tips for storing Iberico ham once it’s been started

Once started, you must ensure that the Iberico ham is well-protected in between slicing to avoid the ham from oxidising (the exposed fat turns yellowish and the meat a dull red colour) and losing its exceptional flavour, texture and aroma. Below are a few recommendations to store Iberico ham in optimal conditions.

It is best eaten at a temperature between 18 and 24ºC. To keep the ham at room temperature, it is best stored in a cool, dry place.

The side on which you should start to slice the Señorío de Montanera Iberico ham depends on how long you think it will last in your home. If you expect to take more than a couple of weeks to get through it, which is usually the case in an average household, then we recommend slicing the Iberico ham with the hoof facing downThis narrower side tends to dry out sooner, so it’s preferable to prioritise eating this part of the ham.

However, if you know you’re going to eat the whole ham immediately or within a few days, it’s best to start slicing it from the thickest part, with the hoof facing upwards. That is the most succulent part of the Iberico ham due to the larger amount of infiltrated fat.

Yes, but no. Although you see this quite often, it can actually be counterproductive if the fat you use oxidises (turns yellowish) and you don’t change it regularly, as it can transfer unpleasant flavours to the exposed surface. The best way to store it is to smear the exposed area with white fat from the actual Iberico ham, leaving a film of impregnated fat. This way, we’ll avoid contact with the air which would dry out the surface (and dull the colour of the meat).

Once the surface is impregnated with the fat, we recommend covering it with a piece of cling film, but without wrapping the piece completely. Then place a clean, opaque cotton cloth on top to stop the light from passing through. At Señorío de Montanera, we have designed a ham cover that we always send out with our P.D.O. Dehesa de Extremadura acorn-fed 100% Iberico ham. This cloth cover allows the ham to breathe and improves its visual appearance.

The Iberico ham does not need to be kept in the fridge, so forget about that idea.

There is no greater pleasure than enjoying freshly-sliced Iberico ham. Try to only slice the ham that you’re going to eat, to to avoid loss of flavour and texture. If this isn’t an option, due to lack of time or slicing skills, we recommend that you ask a professional to slice and pack the ham according to your needs. That way, you’ll make the most of the value and quality of this gastronomic gem. 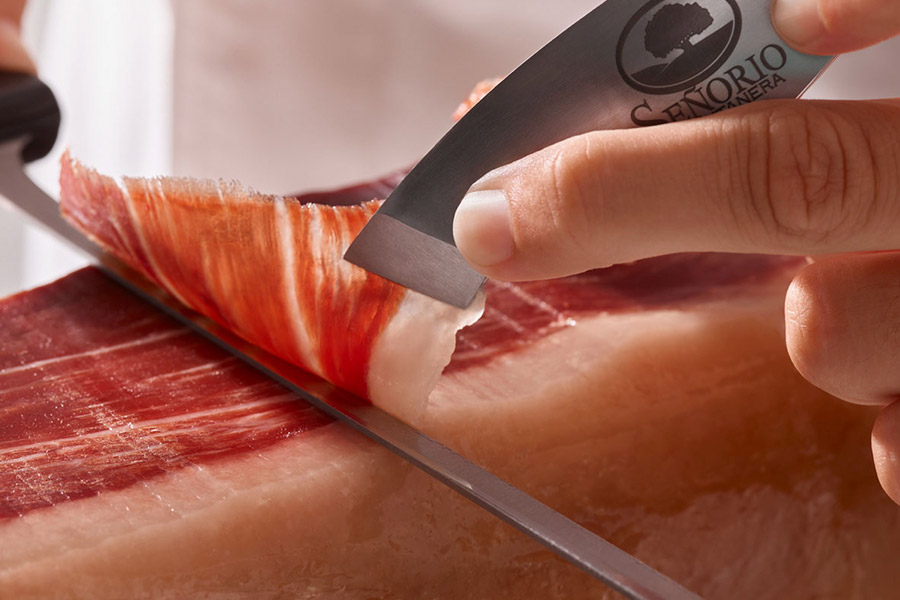 What if the started acorn-fed 100% Iberico ham isn’t going to be eaten within a month?

In principle, nothing major will happen. The exposed part may appear a little less red and turn perhaps a more reddish-brown in colour. If the storage conditions haven’t been the best and you’ve kept it in quite a damp place, without protecting the exposed area with cling film, you might see some mould. In this case, you should remove the outermost slice (no more than 1 or 2 mm thick) and continue to eat it as usual.

More and more customers are turning to our practical trays of sliced Iberico ham for its ease of consumption and convenient storage. A few years ago, Señorío de Montanera revolutionised the Gourmet market with a new modified atmosphere system for packaging sliced Iberico ham. This exclusive packaging system enables all the exceptional qualities of the Iberico ham (texture, flavour and aroma) to be preserved intact, with an estimated shelf-life of up to five months unopened.

Trays of sliced Iberico ham are a practical and exquisite solution for enjoying the pure Iberico flavour as if it were freshly sliced, wherever you are and whenever you fancy it. We recommend keeping it in the fridge and avoiding sudden changes in temperature. To enjoy its unique qualities to the fullest, we recommend taking the tray out of the fridge 15 minutes before eating to allow the product to come to temperature.

Unlike vacuum packaging, you don’t need to do anything else with the tray, such as the common practice of immersing the packs of sliced ham in hot water. With protective atmosphere packaging, the slices of Iberico ham are easily separated, with no plastic sheets between layers that could transfer an unpleasant texture or flavour to the product.

Señorío de Montanera has a wide range of sliced Iberico products which use this new packaging system, aimed at increasingly demanding gourmet customers. 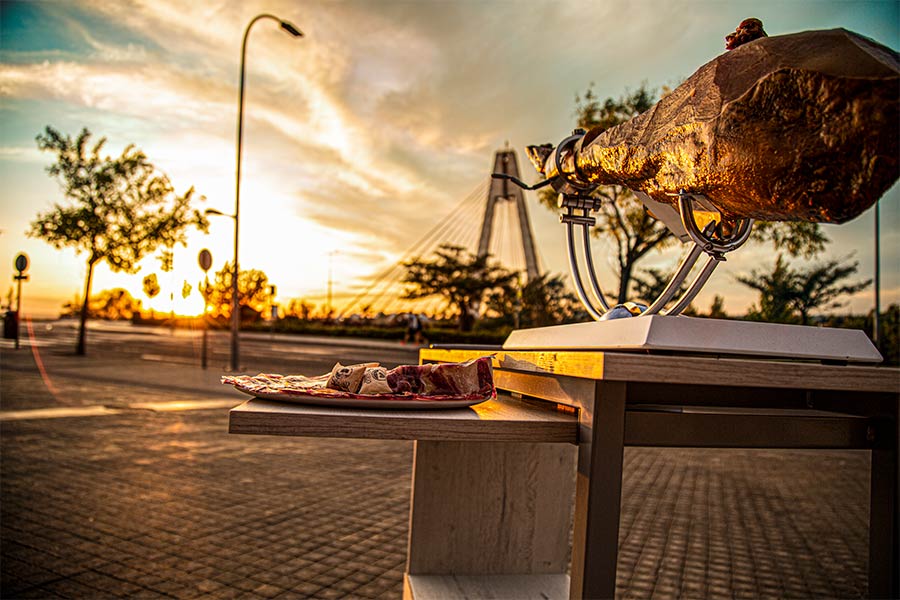 Iberico ham does not have an expiration date per se, but rather a best-before date. At Señorío de Montanera we send our customers the Iberico hams when they are at their best, after each piece has been individually tested in our curing cellar prior to shipping. Therefore, despite the best-before date indicated on the label, we recommend you start the ham within six to eight weeks from having received it, as opposed to storing the ham at home for several months. If you are unable to do so, we recommend that you ask a professional to slice and package the product in a format more suited to your needs, or that you request that the ham be delivered to you sliced from our online store; this way, you’ll extend the shelf-life of the product and enjoy the benefits of this unique gastronomic gem to the fullest.

Once started, how long you have to eat the Iberico ham depends on the weight of the piece and level of curing. It’s important to bear in mind that the meat oxidises and its quality diminishes over time, so we don’t recommend you eat it over a period of more than a month after starting it, unless it is properly protected (as explained above).

In the case of sliced Iberico ham, at Señorío de Montanera we indicate a best-before period of five months, in the case of the sliced ham in protective atmosphere packaging, and ten months for vacuum-packed sliced ham.

Iberico ham is one of the greatest treasures of Spanish gastronomy and one of the most highly valued gourmet products, both at home and abroad. Due to the premium quality and high gastronomic value of Iberico ham, it’s important to enjoy this delicacy at its best, in order to benefit from its full potential. One last piece of advice to make the most of this unique gastronomic gem: the best way to enjoy Iberico ham is by sharing it in good company; because happiness, like Señorío de Montanera Iberico ham, also has a Designation of Origin.