The importance of the Montanera season in the Dehesa de Extremadura

During the montanera season in the Dehesa de Extremadura, this natural landscape is transformed and starts coming to life. The moment the holm oaks and cork oaks amaze us with the ripening of their fruit, marks the start of the quintessential season of our natural environment.

In this unique ecosystem, the acorn-fed 100% iberico pigs of Señorío de Montanera are reared in the wild and enjoy more than 3 hectares of land per animal. A natural and exclusive diet, based on acorns and natural resources, is responsible for the excellent aroma and characteristic flavour of the best acorn-fed iberico ham from Extremadura. All this, combined with a purely artisanal production, are essential to obtaining the highest quality acorn-fed iberico hams.

What is the iberico pig montanera season and what does it involve?

The montanera season is the last stage in the rearing of the iberico pig, a period in which they live in freedom in the dehesa pastures and feed exclusively on acorns and natural resources from the field. This stage, which runs from October to March, coincides with the acorn production period, which is essential and responsible for the quality and flavour of iberico ham. 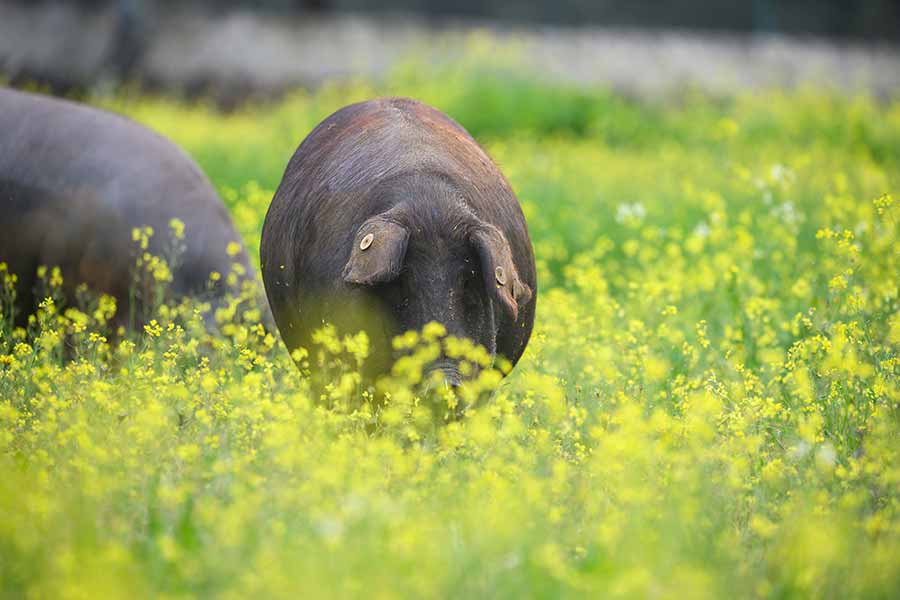 When does the montanera season start?

Every year, with the arrival of the first October rains, the “Dehesa de Extremadura” becomes adorned with its very best fruit and starts to come to life. The montanera season coincides with the acorn production period in the dehesa pastures, which normally runs from the beginning of October to the middle of March.

But the pastures are fickle and the best weather conditions for a good montanera season are not always guaranteed. This season has been exceptional for holm oaks but bad for cork oaks. Last year, it was the exact opposite; this phenomenon is known as “vecería” and it can also affect dry-land olive groves. The heavy September rainfall in Portugal and western Extremadura has yielded excellent acorn crops—in terms of growth and weight—which means they are high in sugars (starch), and fat (rich in oleic acid, mainly), with a thinner shell, making them easier for the pigs to peel before eating them. These high-quality fruits are extremely appetising for the iberico pigs.

In addition, the October rains have allowed abundant growth of the dehesa grasses, another of the essential foods during the montanera season. Iberico pigs love eating grass with the acorns to “refresh” the palate; the animal is quite the gourmet, and it’s a bit like serving a hearty stew with a side salad. 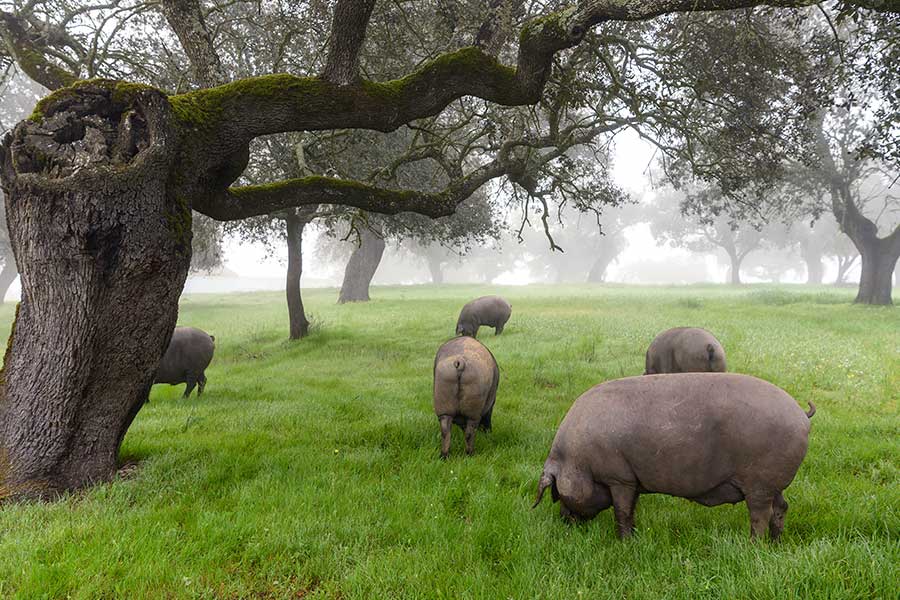 Why is the montanera season so important to producing good iberico ham?

Through this diet of the iberico pig, which is inherent to extensive traditional farming, the animals benefit from the many nutritional properties of acorns. This fruit, rich in carbohydrates and fatty acids, contributes to the marble-like veins of infiltrated fat between the animal’s muscle fibres, and is the foundation of the future succulence, aroma, flavour and texture of the piece.

These characteristics of the acorn and the iberico breed are reflected in the unique character of acorn-fed 100% iberico ham. A source of protein and oleic acid, which make it one of the most complete foods in the Mediterranean diet to be consumed as a very healthy pleasure.

For all these reasons, there is no doubt that this type of natural acorn-based diet is the key to the flavour of Señorío de Montanera's acorn-fed 100% iberico ham. A true gastronomic gem whose premium quality is guaranteed by the Protected Designation of Origin Dehesa de Extremadura.

At Señorío de Montanera, experts in iberico products, we defend the traditional livestock production of the pure iberico pig. We demonstrate our respect for nature and the iberico pig through our perseverance in caring for our dehesa pastures over generations, keeping this unique ecosystem alive, and preserving the purity of the iberico breed.

For more than two decades, Señorío de Montanera has been the leader in acorn-fed pure iberico products from the Designation of Origin Dehesa de Extremadura, the most demanding of the iberico sector in Spain. For an iberico product to receive this certification, comprehensive work is required—from the rearing of the iberico pig in the Dehesa de Extremadura and its montanera season, to the final curing process in the cellar; thus guaranteeing the highest quality throughout the entire chain. 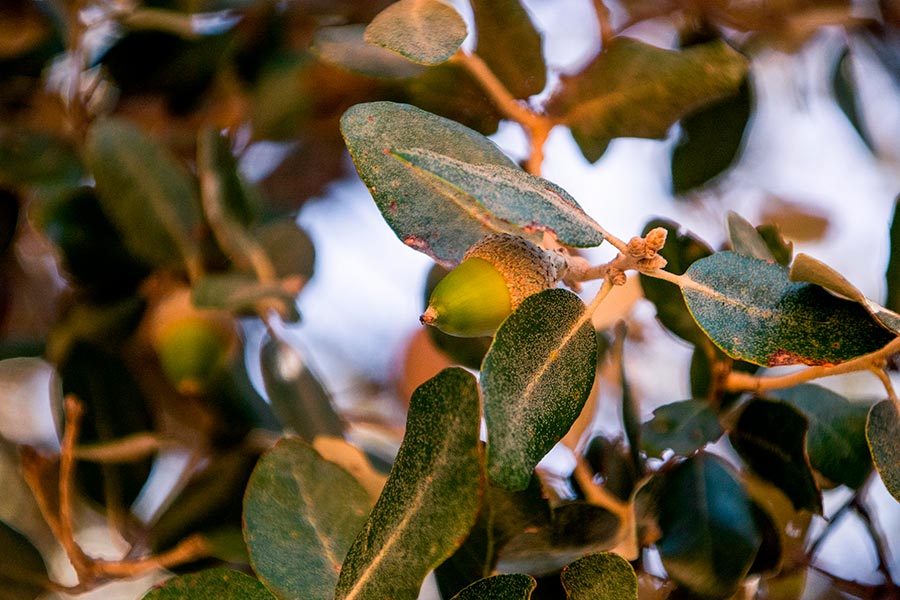 Señorío de Montanera manages more than 60,000 hectares of dehesa pastures, which is the best land for the iberico pig. This year, the montanera season has been exceptional in the holm oak pastures, with acorns from Extremadura that are high in sugar and fat, and therefore irresistible to iberico pigs. The results of the most recent pig fattening period have broken a record in the history of Señorío de Montanera: the animals, which started this stage weighing about 10 arrobas (about 115 kilos), have gained around [email protected] (more than 80 kilos).

Working with arrobas may seem archaic, but it is the system used by the iberico sector to define the weight and determine, for instance, the quality of the montanera season. A weight gain of 3 arrobas during the montanera season (feeding exclusively on acorns and natural pastures) is poor, 4 arrobas—46 kilos—is the minimum weight established by the iberico Quality Standard, 4.5 arrobas is the value recommended by the P.D.O. Dehesa de Extremadura (the most demanding Protected Designation of Origin), and 5 arrobas is considered a very good montanera season; therefore, the 7 arrobas that the Señorío de Montanera iberico pigs have gained this season means an extraordinary montanera season.

This exceptional “reposición de bellota” (fattening with acorns), which is how the weight gained by the pigs during the montanera season is known, has given rise to larger pigs with a higher level of oleic acid. For this reason, this year’s acorn-fed iberico ham from Extremadura will require a longer curing period, but in four years, we will be able to savour unique pieces of the best quality and with the most select acorn-fed iberico flavour.

The best areas in the dehesa pastures for the montanera season

As for the different regions, this year the “privileged” areas have been those located in western Extremadura and parts of Portugal, as the montanera season has not been equally magnificent in all parts of Spain. Other farms managed by Señorío de Montanera in the area of Huelva and Sevilla have experienced a medium-quality montanera season as they are mainly made up of cork oak pastures, with poorer acorn production.

The tradition of the montanera season has been maintained over time and is the main reason for the quality of 100% iberico hams and cured sausages, giving them the title of “acorn-fed”. By choosing acorn-fed iberico products, you are guaranteed that flavour, which only comes with pigs that have been reared in the montanera season and whose nuances evoke the purest essence of the Dehesa de Extremadura.

In addition, this type of diet not only influences the flavour and texture of the hams, but also their many nutritional properties. Based on the significant fattening experienced this montanera season, the level of oleic acid in iberico pigs could exceed 57%, when in normal situations it would be around 54%. This fatty acid from the Omega 9 series is an indicator of the quality of iberico meat, which is beneficial for blood vessels. This is the reason why acorn-fed iberico ham is a heart-healthy product of the Mediterranean diet.