Classification and labelling of Iberico ham: characteristics and differences

Iberico ham is a gourmet product destined to delight even the most refined palates with its unique appearance and excellent gastronomic properties. However, there are different types of Iberico ham and it can often be difficult to select a piece that reflects the true value of this gastronomic gem.

To select a top-quality Iberico ham we need to look out for the following aspects that will give us an idea of the quality of this gourmet product. This post explains Iberico hams are classified by seal.

How many types of Iberico hams are there?

There is no doubt that Iberico ham is a unique treasure of Spanish gastronomy. Its intense aroma, melt-in-the mouth texture and exquisite flavour are some of the reasons for its worldwide fame as a gourmet product. In order to fully appreciate the essence of this culinary gem, it’s important to understand how to identify the quality of a ham.

Quality is not a linear concept, but rather a set of properties that determine the essence of a product. And in the case of Iberico ham, its quality depends to a large extent on the purity of the breed of the Iberian pigs and their diet. 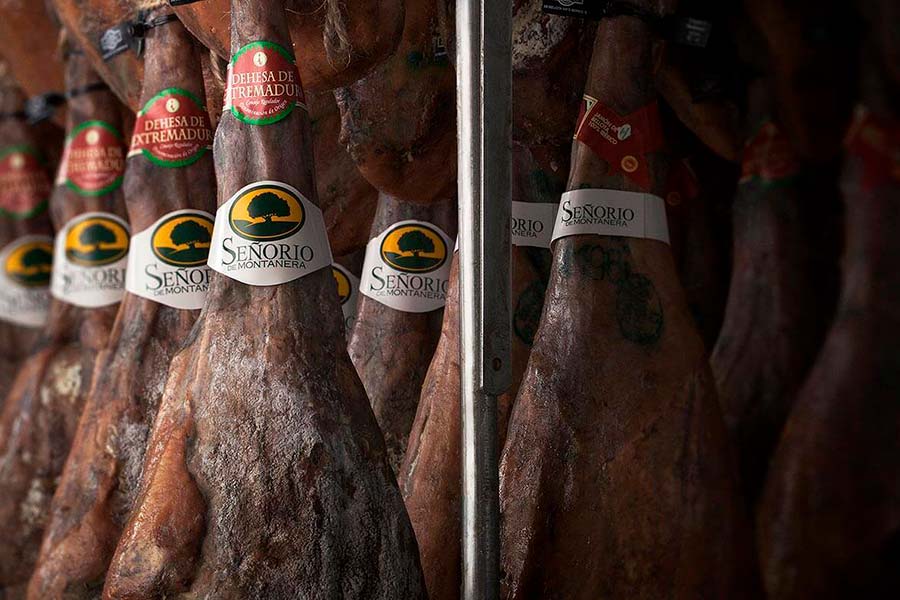 First and foremost, we all know that Iberico ham has to come from an Iberian pig. However, over the past few decades, the introduction of dark-coated early-maturing breeds, such as the Duroc-Jersey, has led to indiscriminate cross-breeding with Iberian pigs. This has contributed to a great deal of confusion and uncertainty about breeds. We can identify the following percentages of breeds in Iberico hams:

In any case, for the pig to be Iberian, the mother must always be 100% Iberian breed.

The other determining factor in the quality of Iberico hams is the rearing and diet of the pigs. The activity of the Iberian pig in the dehesa pastures combined with the diet based exclusively on acorns has an enormous influence on the exquisite flavour that is so characteristic of this ham. In addition, quality acorn-fed Iberico ham provides major health benefits. As for the types of Iberico ham, based on diet, we find the following varieties: 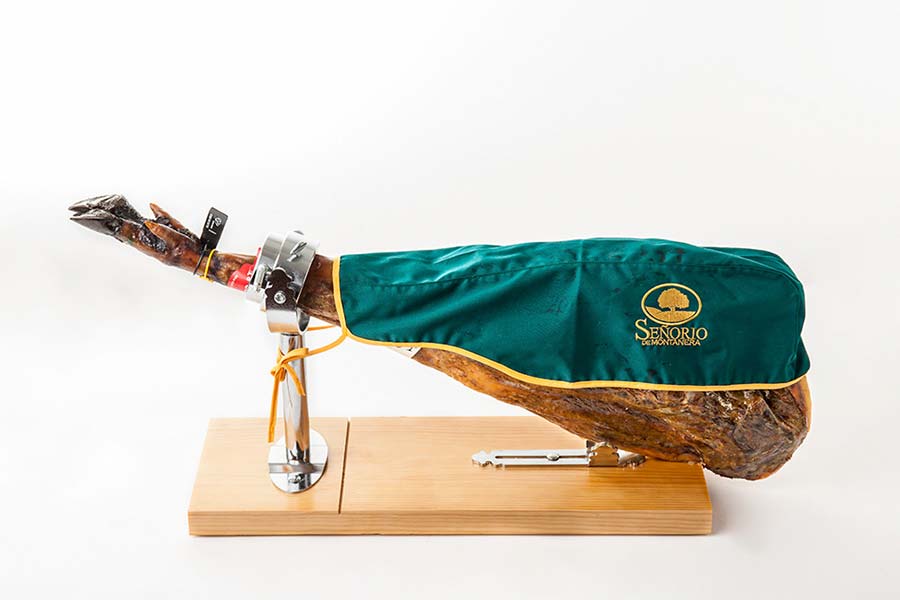 Classification of Iberico hams by seal

The first quality standard for Iberico ham was published in 2001, and was amended for the first time with Real Decreto 1469/2007, , to correct certain errors and bring transparency to an ambiguous and vague sector.

In a second revision, Royal Decree 4/2014 provided a new regulatory instrument that promised to guarantee the reliability of foods promoted as Iberico products. Thus, a new seal model was introduced to identify the different categories of Iberico pork hams.

Colours and categories of Iberico hams

In order to organise all this chaos of breed percentages and diet types faced by consumers, the new Iberico quality standard proposed to divide Iberico ham seals by colour. Consequently, all Iberico hams carry a tamper-proof seal on the hoof that guarantees their origin and quality according to colour: black, red, green and white.

I’m sure you’ve asked yourself at some point about the meaning of a black seal on a ham. The black seal on the Iberico ham is a guarantee that it comes from a 100% Iberian pig reared in the wild in the dehesa, where it has been fed exclusively on acorns and natural pastures. Only if we select acorn-fed 100% Iberico ham (black seal) can we be confident that we are handling a piece of the highest quality.

The red seal ham is the next level of quality. These hams come from crossbred Iberian pigs (50-75% Iberico) fed on acorns in the dehesa pastures. After this, the rest of the seals only determine the type of diet or rearing of the Iberian pig, regardless of the purity of its breed.

So what does the green seal mean? ? In this case, the green seal identifies ‘Cebo de Campo’ Iberico hams. In other words, these hams are made from Iberian pigs reared on farms where they are generally fed on feed. The white seal on the ham is the one that identifies ‘Cebo’ Iberico hams, which come from Iberian pigs reared intensively on a diet based on feed. 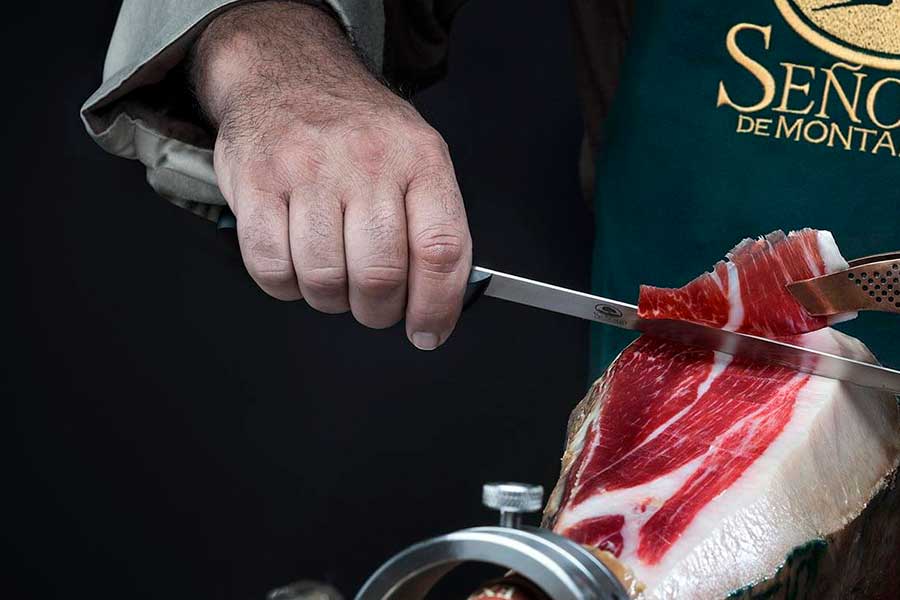 Señorío de Montanera is all for protecting the dehesa pastures and preserving the pure Iberian breed. All its products are made from 100% Iberian pigs that are reared in the wild on its more than 60,000 hectares of dehesa pastures.

When it comes to buying an acorn-fed 100% Iberico ham from Spain, the confidence and transparency offered by the brand play a key role. In the Señorío de Montanera online store, all the hams, shoulder hams and pork loins have the black seal that guarantees the quality of its origin: acorn-fed 100% Iberian pigs. However, within this top-quality category, there are some differences resulting from the production process.

On the one hand, there’s the acorn-fed 100% Iberico ham, perfectly labelled with its black quality seal. Señorío de Montanera carries out exhaustive controls during the rearing of 100% Iberian pigs to ensure the quality of its products from the pastures to the end consumer.

The Señorío de Montanera ham with Designation of Origin is part of a special and exclusive selection. The Designation of Origin Dehesa de Extremadura is very demanding when it comes to setting minimum quality standards and selecting the pieces protected under its seal. The hams are identified by their black seal and the Dehesa de Extremadura PDO logo, which is an additional seal of guarantee.

Finally, organic 100% Iberico ham comes from 100% natural breeding and production. Organic livestock farming promotes the conservation of the environment based on the rational use of natural resources. These hams are duly labelled with their black seal as indicated by the quality standard and the EU organic food seal (represented by a leaf with stars). 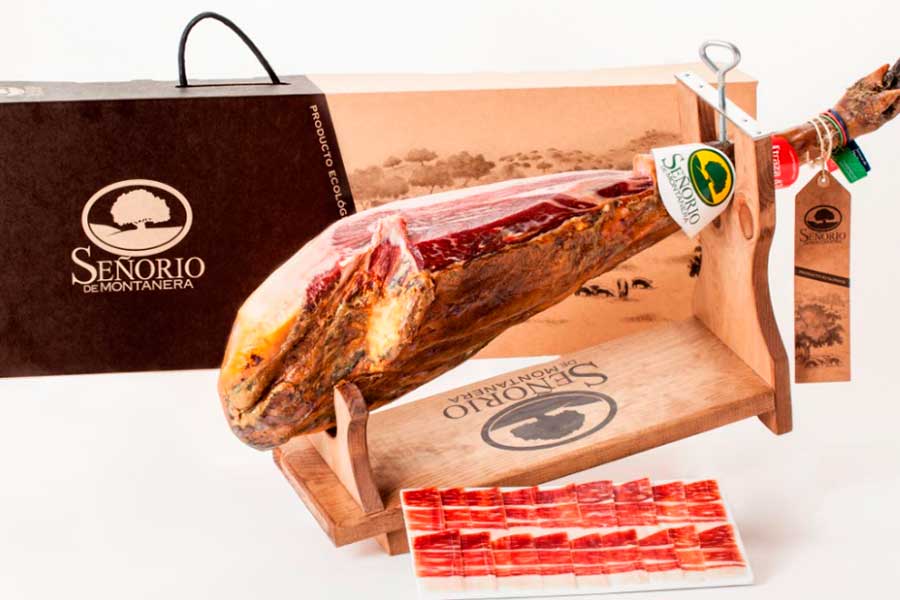 How to select the right Iberico ham?

First of all, we must look at the coloured seals on the Iberico ham, in order to be able to identify its category. If you have any doubts about the seal, which is placed around the hoof of the ham, you can refer to the printed label on the ham. The full name of the piece must appear in the following order: type of piece (ham or shoulder ham) + diet (acorn-fed, ‘Cebo de Campo’ or ‘Cebo’) + breed percentage (100% Iberico, 75% Iberico or 50% Iberico).

The Designation of Origin label is an additional seal of guarantee that certifies that the product complies with unique quality standards, controlled by a body external to the brand. Señorío de Montanera is the leading brand of the PDO Dehesa de Extremadura, the most demanding certificate in the sector.

Señorío de Montanera also includes a unique seal with traceability information for the hams. This is a unique code that provides us with relevant information to control the stability and quality of our products. Some of this data corresponds to the farm of origin, acorn consumption during the montanera season, fatty acids profile, etc. In order to guarantee maximum transparency, consumers can check the traceability of their ham or shoulder ham by entering the piece number of the the traceability seal on our website.

Information is power. Now that you know what the different Iberico ham seals mean, you will have no problem selecting the piece that best suits your preferences and needs. Ham labelling will help you make the best choice!