The Iberian cured sausage pantry of Señorio de Montanera preserves the essence of a gastronomic heritage that is reflected in the unique flavour and personality of each of its products. The Señorio de Montanera Iberian morcon is one of the great unknown products of our land, but also the most surprising when you taste it due to the quality of the raw material. This gourmet product is made from acorn-fed 100% Iberian presa pork meat has been awarded two stars at the Great Taste Awards in London, considered the Oscars of gastronomy worldwide. 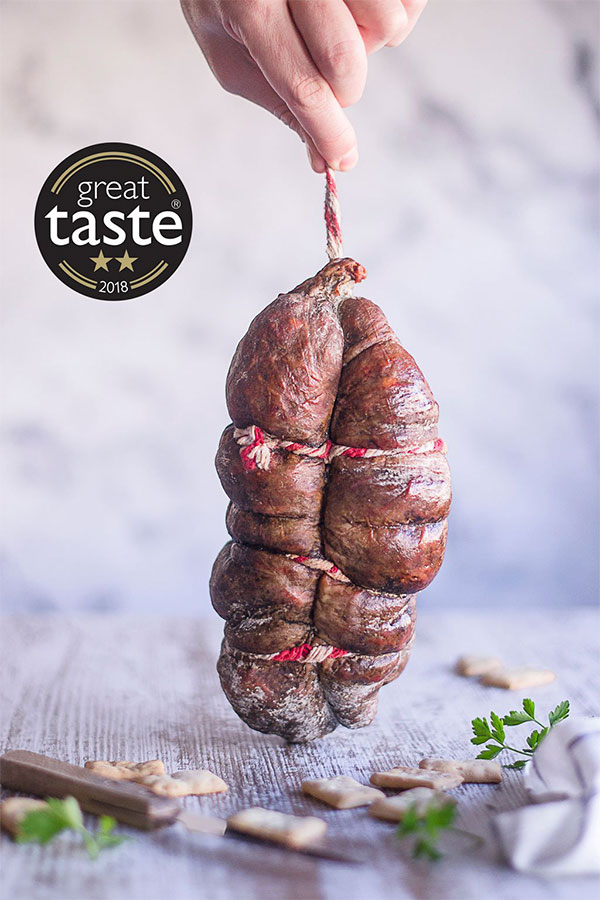 What is Iberian Morcon?

Iberian morcon is one of the most typical and genuine products of Extremadura, a traditional cured sausage that reflects the traditions and flavours of the dehesa pastures. This iberico product is made following the traditional recipe used in the old slaughter procedures of the towns of the southern Extremadura, where the casing of pig intestine is called “morcón” (hence, its name).

The Señorio de Montanera Iberian Morcon is made from Shoulder presa meat, sliced by hand, and other top quality lean pork, marinated with a mixture of La Vera paprika, a light touch of garlic and other spices that are reminiscent of chorizo stew. Curing in a natural cellar for more than six months refines the aroma and flavour qualities inherent to this traditional gourmet food.

Characteristics of the Iberian morcon

This traditional Iberian cured product from Extremadura surprises with its exceptional succulence and irregular shape. The presa meat yields a flavour and texture very similar to that of the Cured acorn-fed Shoulder presa Iberica or lomito, most notably the hint of La Vera paprika with its captivating taste.

The texture is firm and compact, although the Iberian presa pieces can fall apart if cut too thin, as there is no ingredient holding it together. The thickness of the piece, with a diameter between 80 and 100 mm, larger even than that of the Señorio de Montanera Lomo Doblado (acorn-fed Iberico Lard Coated Loin), gives it amazing succulence and texture. 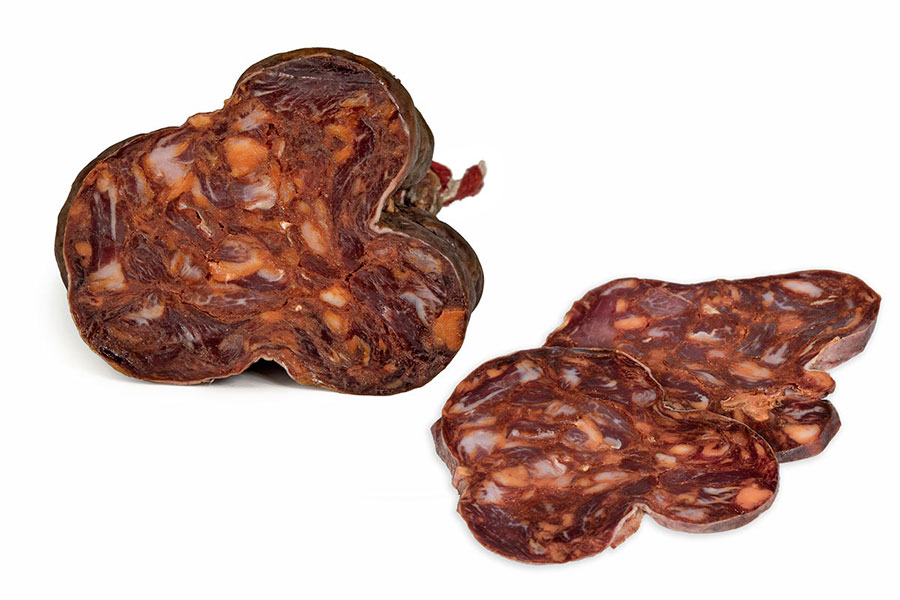 How is iberian morcon made?

The Señorio de Montanera Iberian morcon is made from Shoulder presa Iberica meat, which is sliced by hand, and lean pork from acorn-fed 100% Iberian pigs, mixed in the right proportion by our master butcher. Following the typical recipe of the the traditional slaughter procedures of southern Extremadura, a marinade of sweet paprika, garlic and salt is added. The mixture is then stuffed by hand into a natural casing and tied manually in a criss-cross fashion so that the different lean meats stay together during the curing period.

After a period in the drying room, it is moved to a natural curing cellar, where it remains for more than six months, to achieve unique and exclusive nuances of the best Iberian products from Extremadura..

Qualities of the Iberian morcon

The marbled slice of the Señorio de Montanera Iberian morcon has a predominantly intense purple colour derived from the use of shoulder presa Iberica meat and other noble lean cuts in its production. Its aroma is warm and intense and its exquisite succulence is visible to the eye and noticeable in the texture and on the palate, where it leaves a lingering flavour full of nuances thanks to its slow curing process and the quality of the raw material used. A gourmet gift for the palate, which will appreciate the velvety feel and sweet finish.

Señorío de Montanera is a leading brand in the the production of pure Iberian products with the Designation of Origin Dehesa de Extremadura. Since its foundation, it has been committed to the gastronomy and traditions of this land to produce the best Iberian products from Extremadura.

For this reason, as part of its philosophy, it has focused its research efforts on the recovery of traditional recipes from the towns of Extremadura, many of them forgotten because they haven’t been handed down through the generations, and the production of more natural and sustainable cured sausages. In this way, all the gourmet products available on the Señorio de Montanera online store follow the production methods from the traditional village slaughters and are cured sausages free from gluten, lactose or any other allergen.

The exceptional flavour of Señorio de Montanera Iberian morcon has been recognised with two stars at the Great Taste Awards in London, one of the highest recognitions of excellence in the gastronomic world. The quality of its main raw material, acorn-fed Iberian presa pork, and its traditional production methods make it one of the most exquisite pieces of Extremadura gastronomy.

Given that the Señorio de Montanera Iberian morcon is an Iberian cured sausage, it is normally eaten cold (uncooked), in slices that are not too thin to prevent the Iberian presa meat from falling apart. But the power of its flavour makes it the perfect ingredient prepare simple and original recipes that will surprise even the most demanding palates. 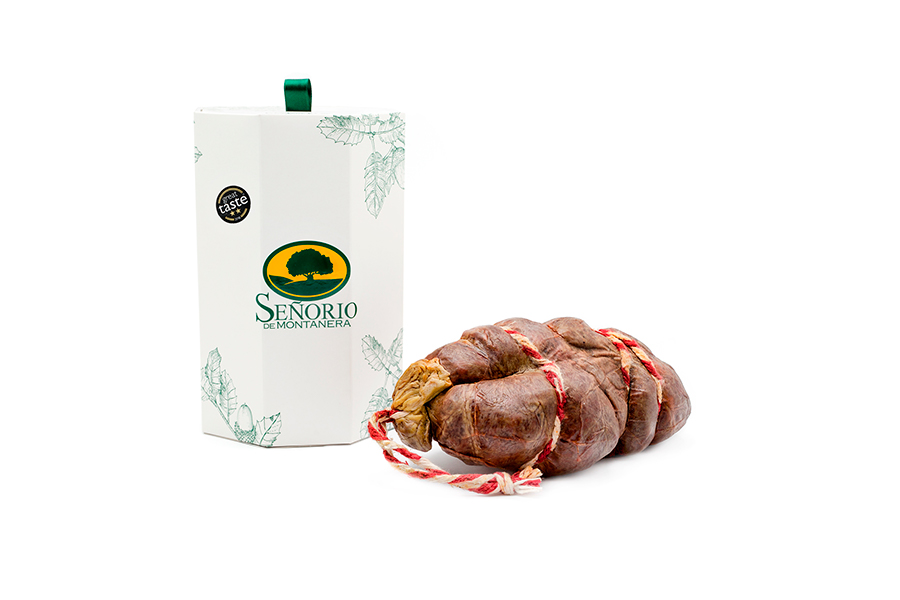 As part of their commitment to make the best Iberian cured sausages from Extremadura, Señorio de Montanera meticulously controls all the stages of the production process; from the breeding of pure-bred Iberian pigs in the dehesa pasture to the manufacture of the end product. This, without a doubt, is a guarantee of unbeatable quality and a symbol of their commitment to all their pieces having that unique flavour of the true gourmet food.